Here’s a summary of the results of historic building recording and excavation at Torre Abbey, Torquay, Devon. It was carried out by Oakford Archaeology between June and August 2021.

The principal aim of the historic building recording and archaeological excavation was to ensure the adequate recording of any historic fabric exposed. The Oakford Archaeology team aimed to establish the presence or absence, character, depth, extent and date of archaeological deposits within the site and to excavate and record them as necessary prior to and during repair work. Below are the results of the building survey and small excavation. 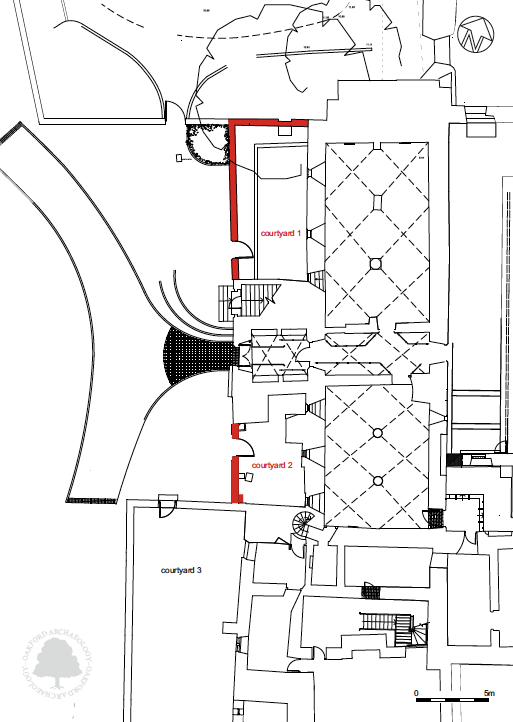 To the north of the Abbot’s Tower the west and east facework elevations of the western courtyard 1 boundary wall were recorded. The wall dates to the early 19th century, part of the work undertaken by George Cary IV. 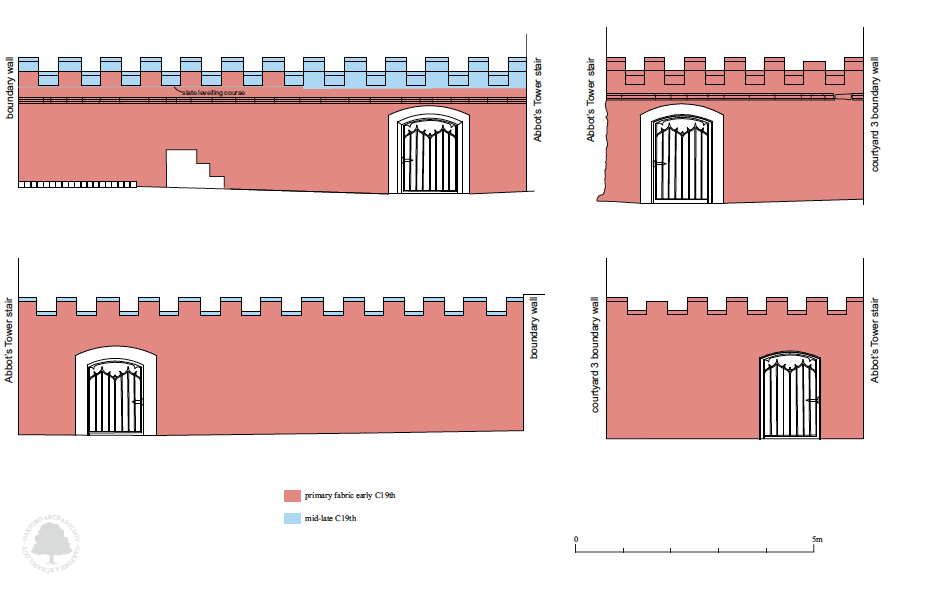 Torre Abbey, West and East elevations of Courtyards 1 and 2

It consisted of a single build constructed of local limestone rubble below the level of the string course, abutting both the post-medieval boundary wall to the north and the 14th century stair to the Abbot’s Tower to the south. The string course was built of local red sandstone with the wall fabric above consisting of further limestone rubble identical to the main wall fabric below. Above the limestone was a thin dark grey slate levelling course. This survived underneath seven of the 13 merlons, suggesting that the six southern merlons have been rebuilt at a later date. The parapet above is built entirely using red sandstone. 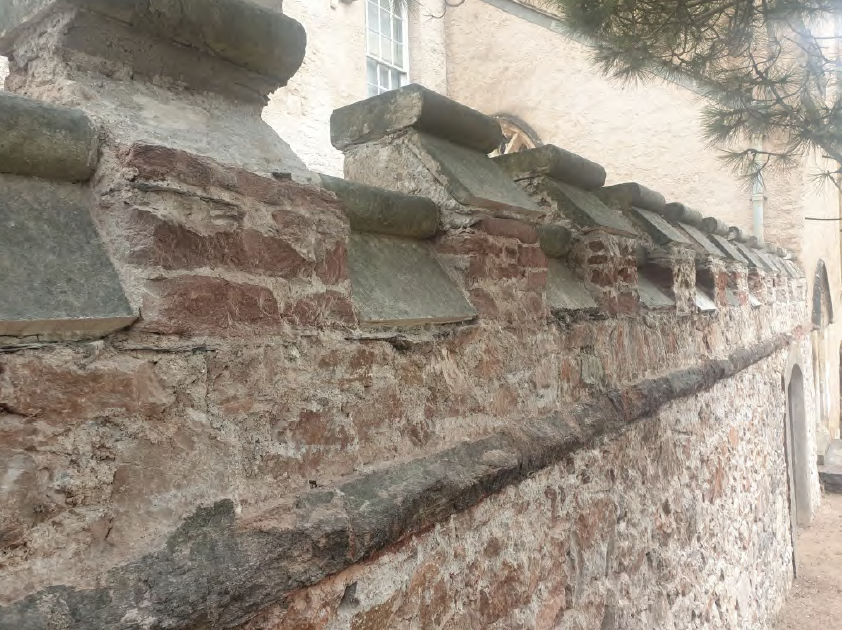 The original wall is bonded with a white lime mortar with rare inclusions of lime and charcoal flecks, slate flecks and common fine grit. A small area of original light red limewash survived within the fifth embrasures. This was overlain by a second render, consisting of a light grey lime ash mortar with common charcoal and lime flecks, and a light pink red limewash finish. The absence of the original slate levelling course underneath the southern merlons and the fact that these are built using the later lime ash mortar suggests a phase of repair and rebuilding. In addition, the copings are set within the lime ash mortar, suggesting that these were either re-set at this time or that they are a secondary feature. The lime ash render was replaced sometime in the 20th century with a light yellow white cementitious render, perhaps part of the extensive repair works undertaken by Colonel Lucius Cary after 1906. The wall incorporated no dressed stone blocks or architectural fragments from the abbey, although it is likely that the stone rubble was quarried from the remains of the medieval monastic complex. 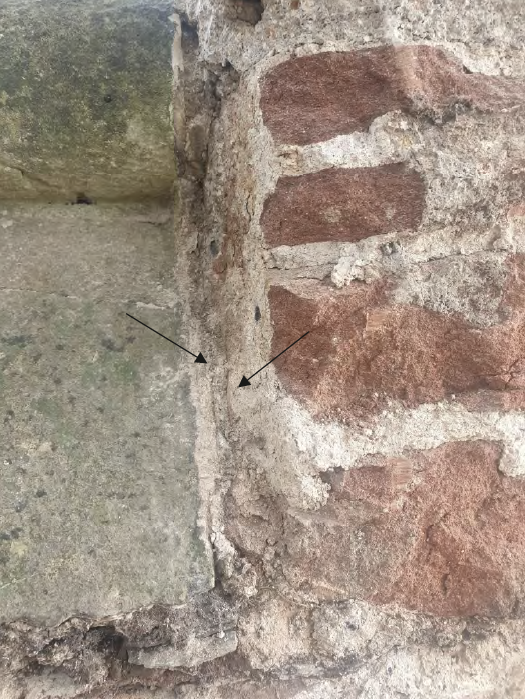 Limited building recording was also undertaken on the south elevation of the northern courtyard 1 boundary wall. The base of the elevation consisted of five courses of ashlar and roughly squared stonework to a height of 0.75m, including local breccia, red sandstone and grey limestone. No architectural fragments were identified, although the dressed stone blocks are likely derived from the monastic complex. 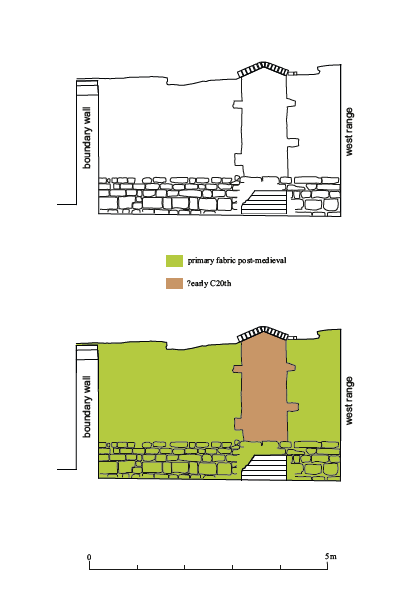 Above this the wall was built of local grey limestone rubble. There was no evidence of a formal capping of the wall top, instead it consisted of a rough cement and stone rubble capping. The eastern end of the elevation was pierced by a single blocked doorway, likely to be contemporary with the primary build. Extending the full height of the wall, it would have provided access to the gardens from the western aspect of the mansion. It is unclear whether the four projections into the wall fabric either side are the remains of a formal stone or brick frame, or simply a result of the later blocking. This consisted of roughly coursed stone rubble. A context for this might be the acquisition of Torre Abbey in 1930 and the opening of the northern gardens to the public. 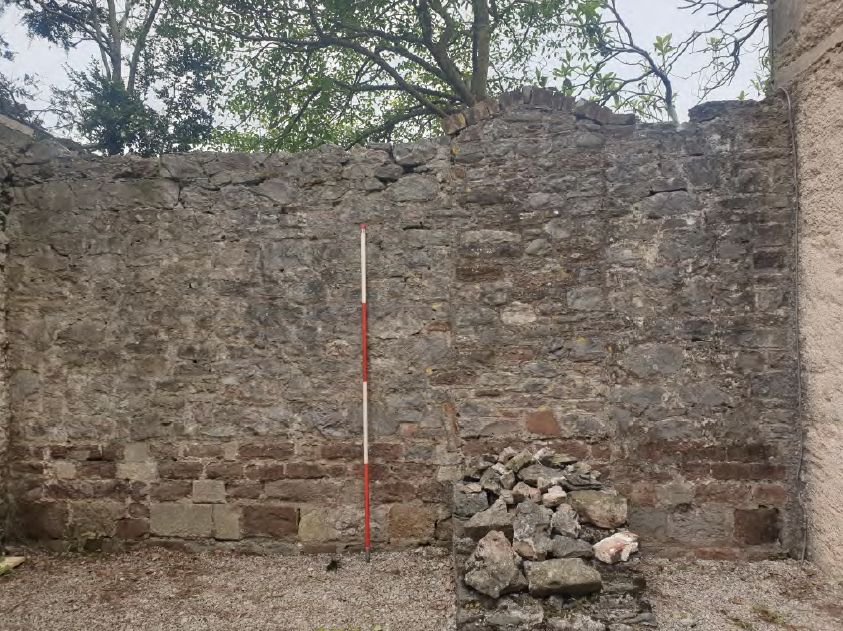 The courtyard 2 boundary wall was built of local breccia, red sandstone, light grey limestone and mid grey slate rubble, as well as handmade brick, bonded in white lime mortar with occasional lime and charcoal flecks. The wall abuts both the earlier courtyard 3 boundary wall to the south and the late 13th or early 14th century stair to the Abbot’s Tower to the north. However, the lower facework of the wall extends underneath the medieval masonry to the north. It is likely that this was done in order to tie the otherwise unsupported wall into the solid masonry of the former medieval range. The string course consisted of mid yellow limestone, while the wall above was built of light grey and yellow limestone, breccia and red sandstone rubble. Both the upper wall and merlons were bonded with the same white lime mortar as the lower section, suggesting the wall is a single build with no later repairs or additions. Finally, no dressed stone blocks or architectural fragments from the abbey were incorporated into the wall construction. Although there are noticeable differences in the materials used f. eg. in the string course and the main facework build, it is likely that the wall is contemporary with the construction of the western wall defining courtyard 1 in the early 19th century. 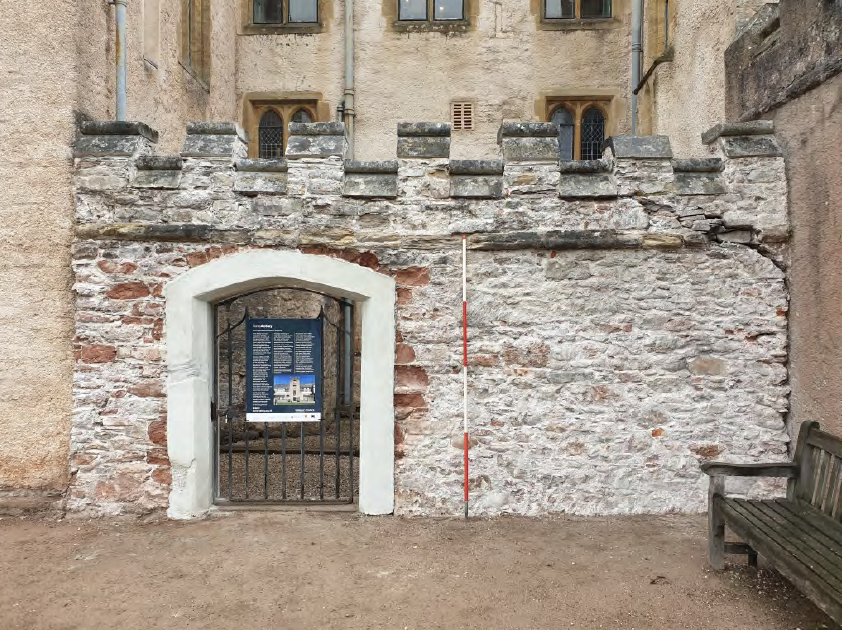 The base of the southern end of the courtyard 2 boundary wall was investigated prior to the works commencing. This involved the excavation of a shallow trench at the interior angle of courtyard 2 and 3. This was approximately 1.2m long, 0.3m wide and excavated to a maximum depth of 0.38m, exposing modern gravel above plastic sheeting covering previously disturbed ground. Neither wall had a proper footing with courtyard 2 wall extending to a depth of 0.11m below current ground level, while courtyard 3 wall extended to a depth of 0.18m before being truncated by a modern drain. Courtyard 2 wall rested on a mid reddish brown silty clay (104) with frequent stone rubble and slate fragments. This contained four sherds of post-1780 industrial whiteware, including one sherd of blue-and-white transfer-print, and a single fragment of 14th century ridgetile, and has been interpreted as a 19th century landscaping deposit. No further excavation was undertaken and no underpinning was required. 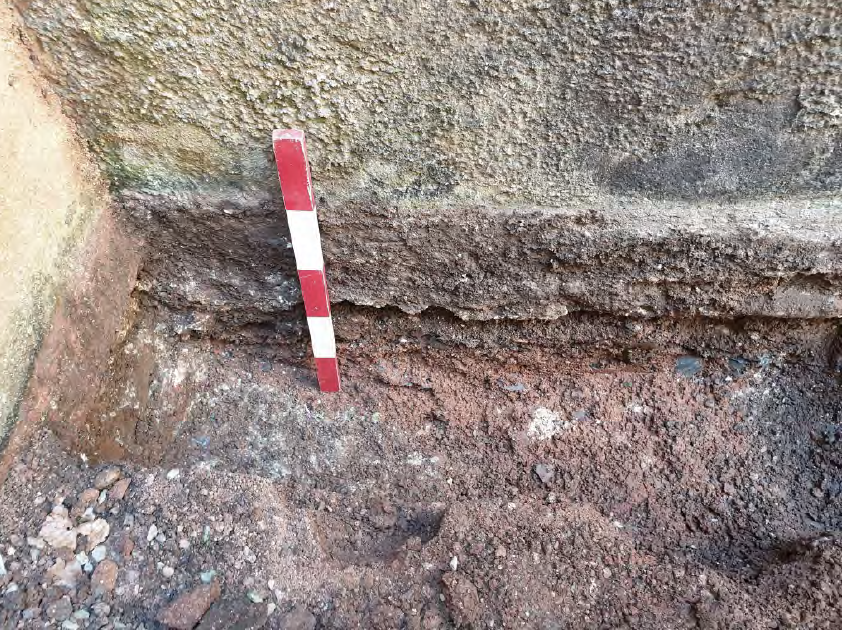