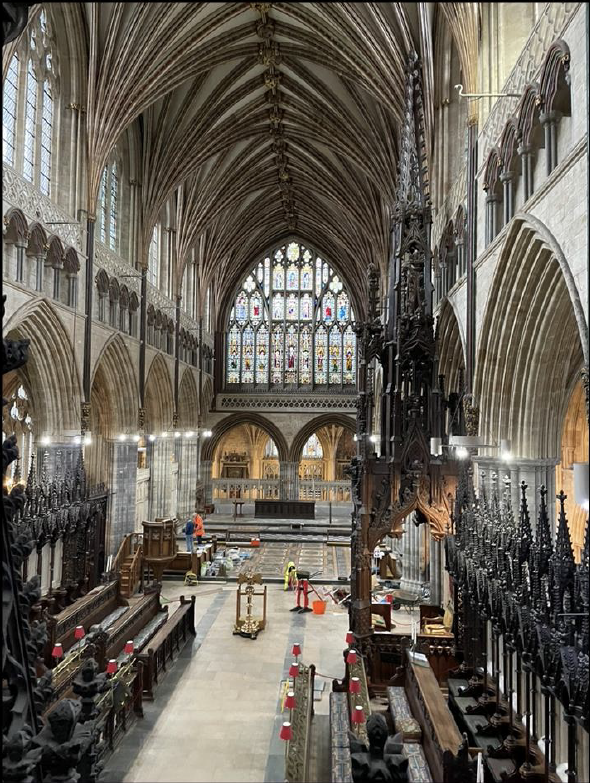 An archaeological evaluation was carried out in the choir, presbytery and aisles of Exeter Cathedral, Exeter by Oakford Archaeology between January and March 2021.The archaeological evaluation involved the excavation of 21 trenches in the presbytery, choir, choir aisles, retrochoir and crossing of Exeter Cathedral, generally to a depth of 0.5m. No archaeological excavations had previously been undertaken in these parts of the cathedral, but a valuable record of the choir floor of 1763 survives, and the buried Romanesque east end of the cathedral had been seen below the choir in G.G. Scott’s restoration of 1871–6.

Regarding the overall understanding of the cathedral, the most significant find was in the western bay of the presbytery (Trench 8), where a small part of a massive and deeply robbed foundation was exposed. The foundation had been robbed when the presbytery had been built at the end of the 13th century. Its outer edge cut obliquely across the choir; there can be little doubt that this was the diagonally set eastern side of the foundation of the apsidal end of the Romanesque Cathedral, first seen but not adequately recorded during Scott’s restoration of the cathedral in 1871–7. As well as establishing the precise position of the apse, the excavation showed that contrary to previous impressions much of it remains undisturbed. On its eastern (outer) side a humic soil was preserved. This key discovery shows that the apse was the eastern end of the building, with garden soil outside, rather than being an internal wall within an ambulatory, as has been proposed recently. 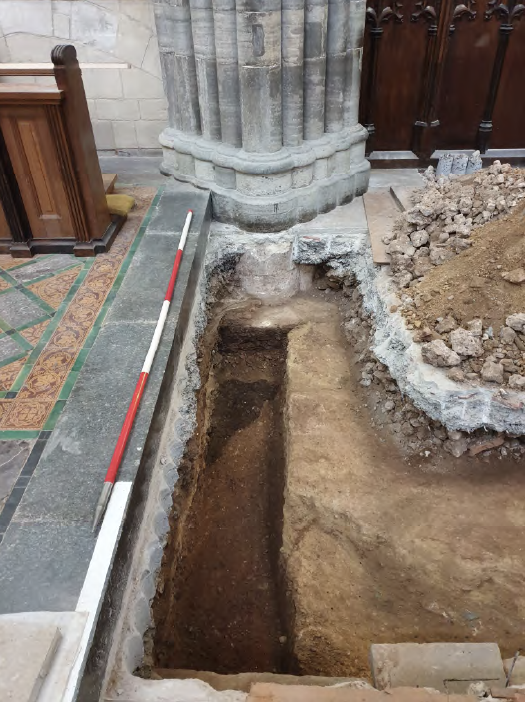 The excavations also recovered some new information about the form of the foundations of the cathedral of the late 13th/early 14th century. A compacted raft of crushed Salcombe stone underlies much (perhaps all) of the choir and presbytery.

The excavation demonstrated that the medieval floor has been removed from nearly all the areas sampled, but a small fragment of medieval tile pavement survives in the presbytery (Trench 7). It consists mainly of Low Countries tiles, probably attributable to a documented repair to the pavement in 1392 but incorporates reused inlaid tiles probably from the floor documented in 1302. Loose tiles suggest the former presence of inlaid tile pavements of c. 1300 in the presbytery and aisles, the latter repaired with late 15th/early 16th-century tiles imported from Normandy.

The excavations encountered numerous graves in the aisles – some earth-cut, other stone- or brick-lined. Several are demonstrably of 18th- or 19th-century date; two appear on the 1763 plan. Fewer graves were found in the choir.

Finally, evidence was found about the likely impact of a proposal to install underfloor heating in the choir and presbytery to a depth of 0.5m. In the eastern part of the choir (Trench 8), all pre-1963 deposits have been disturbed to a depth of 0.4–0.48m and the medieval floor has been removed. On the north side of the presbytery (Trench 4), almost all the area examined was disturbed after 1763 to a depth of c. 0.55m. The sanctuary preserves some medieval pavement below the floor of 1939.

Find out about more about the archaeological services offered by Oakford Archaeology here.