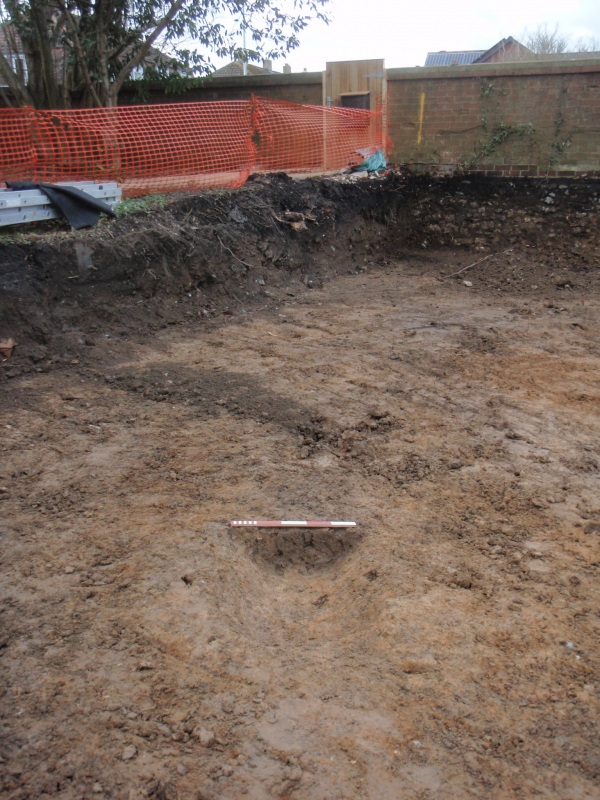 In early 2015 Oakford Archaeology was commissioned to undertake an archaeological watching brief on a small housing development at No. 4 Northcote Lane, Honiton, Devon.

The site was located on the northern edge of the historic town. Little is known of Honiton prior to the Saxon period when it probably formed part of a great estate centred on Axminster. It isn’t until the early 13th century that a new borough was founded by William de Vernun, fifth Earl of Devon. This was probable laid out on a new site along the main Exeter to London Road (The High Street). The medieval burgage plots are still clearly visible running at right-angles to the High Street defining long narrow property strips of generally similar length. The ends of the plots are defined by two long straight boundaries on either side of the High Street, running exactly parallel with it. These boundaries were probably ‘back lanes’ in the medieval town; the lane still exists at King Street on the south-west and fragments of lanes or tracks are located on the northern side.

The works identified a single ditch dating to the mid 13th-mid 14th century. Due to modern disturbance no evidence was found of an associated street/track surface to the south. The paucity of finds and the fact that the ditch was some way away from the rear of the medieval burgage plots would suggest that it served as a field boundary.

Two tree throws to the north were undated but may be associated with the garden first identified on the 1840 tithe map.