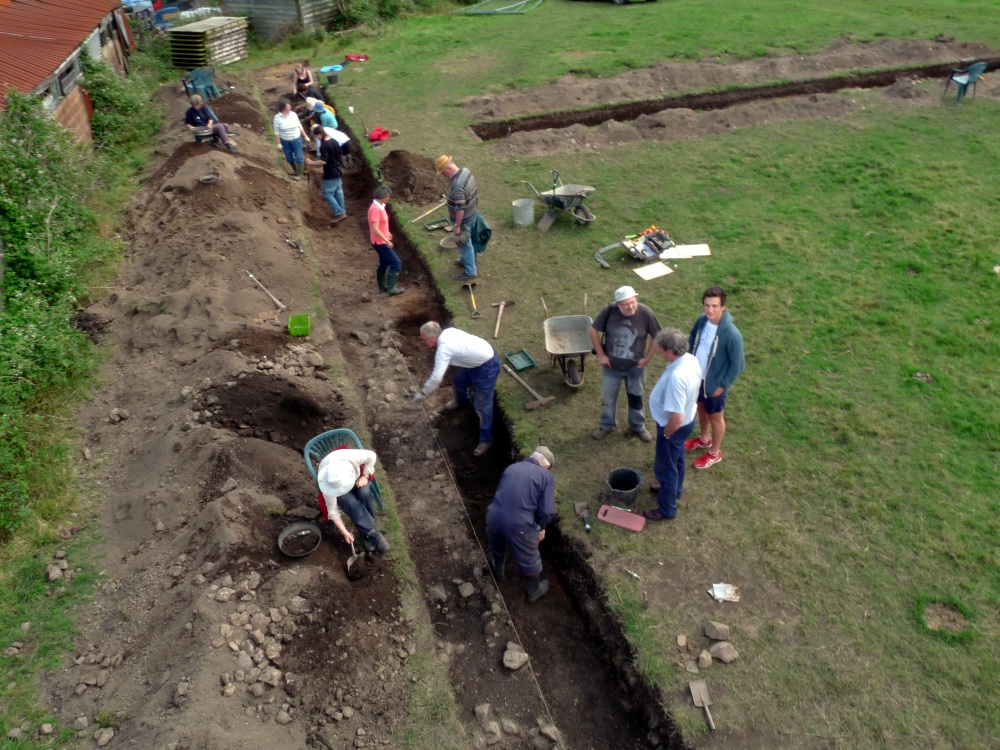 Oakford Archaeology have undertaken a community evaluation, funded through the Dartmoor National Park Authority Moor than meets the Eye project, on the site of a suspected medieval manor house at Widecombe-in-the-Moor, Devon since 2012.

As part of the community involvement the Oakford Archaeology field archaeologists undertaking the work have supervised up to thirty volunteers each day, in addition to providing guided tours of the site to visitors and on-site involvement for Ilsington and Widecombe Primary School pupils.

Although limited in scope and scale, the excavation to-date has established the presence of a multi-phase medieval moated manor house on the site. The primary and secondary earth bank defences, along with the remains of a possible timber-framed structure have been identified, with a number of 13th–14th century pottery sherds recovered from the latter.

Evidence for timber buildings has been identified in Trenches 1 and 4. Consisting of a number of post-trenches and postholes they suggested the presence of an early timber phase or phases. Further excavation has attempted to recover the floor-plan of a substantial timber-framed building set against the rear of the rampart in Trench 9. This was replaced by a timber building on a different alignment. The postholes identified in Trenches 4 and 9 may be related to these buildings or they may represent separate phases of building activity. A number of 13th-15th century pottery sherds were recovered from these features.

Finally, the remains of a large stone building have been exposed in the centre of the site. Consisting of the remnants of five heavily robbed wall foundations they form a putative E-W range. Remains of two extremely fragmentary surfaces survived within this range. The wall remains previously identified in Trenches 2 and 4 have been reinterpreted as the remnants of a small chamber wing with a large fireplace in the western elevation. The large granite slab, previously identified as the remains of an earlier floor, has been reinterpreted as a hearth stone. No evidence survived of flooring within this room. The extensive cobbled surface to the east of the wing is likely an external yard. No earlier timber phase was exposed underneath the stone building and it is unclear from the limited exposure and lack of secure dating whether the stone building is contemporary with the timber buildings or whether they represent separate phases of activity.

Read more about the project on the Dartmoor National Park Authority and Widecombe History Group websites.

This is Westcountry Article

This is Cornwall Article