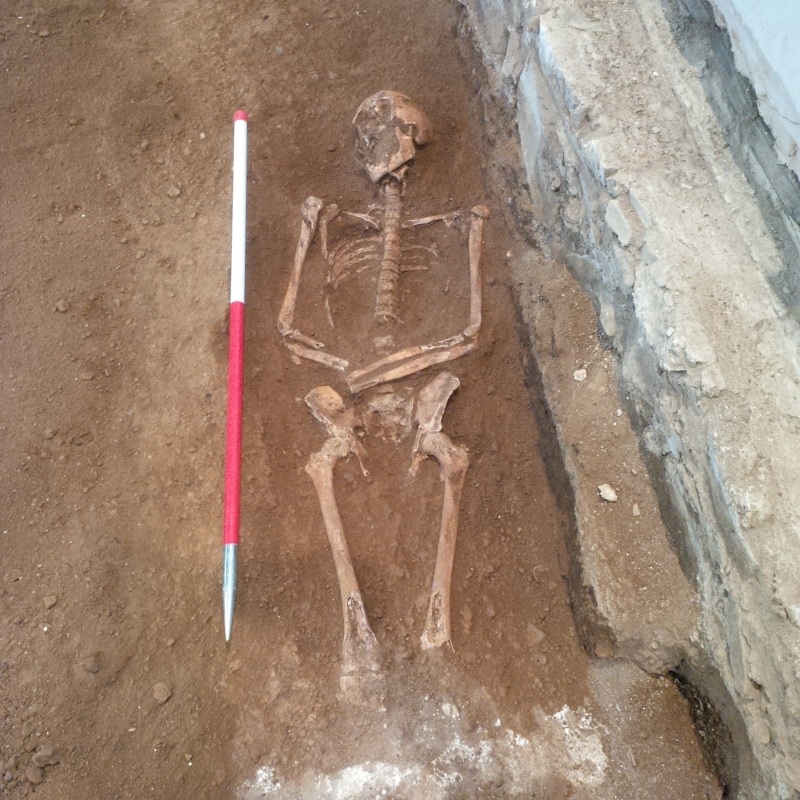 Oakford Archaeology was commissioned in 2013 by John Scott Architects and the Trusham Parochial Church Council to undertake an archaeological excavation at St Michael’s, near Newton Abbot, Devon.

The works provided an incredibly rare opportunity to expose almost the entire interior floor plan of the church, exposing graves and vaults of medieval and post-medieval date. Interestingly no evidence was found of building activity associated with an earlier church, although this may have been destroyed in the 19th century by extensive Victorian excavations throughout the nave, north aisle and chancel. The extent and depth of the earlier excavations came as a complete shock and had removed all earlier floors and surfaces throughout the church, apart from a small area of possible ‘builders trample’ immediately in front of the south doorway.

The works exposed the remains of four individuals, located in the western half of the north aisle. The graves were incredibly shallow and are likely to pre-date the construction of the north aisle in the 15th century.

The Victorian re-ordering had not only removed any ledger stones covering the vaults, but also moved funerary monuments and plaques which would have been located on the walls above, thereby removing any direct link with the graves below. No dating evidence was uncovered in any of the five vaults. However, this burial practice became fashionable during the late 17th century and increased in popularity during the 18th century and down to the mid-19th century. It is therefore likely that they are post medieval in date.

The recovery of a wide variety of floor tiles has provide one of the few opportunities to examine the range of tiles which might be employed in a small parish church in south Devon in the medieval and post-medieval periods. There is a surprising variety of sources for such a small church which mirrors assemblages previously identified in larger parish churches in Devon. Tiles from the Low Countries and France are by far the most common, illustrating the way in which locally made inlaid tiles of the 13th and 14th centuries were superseded after about 1400 by plain tiles, mainly imports.