This blog post describes archaeological work and desk top assessment investigations carried out by Oakford Archaeology and other heritage organisations which has added to our knowledge of the history of Sidwell Street, Exeter. 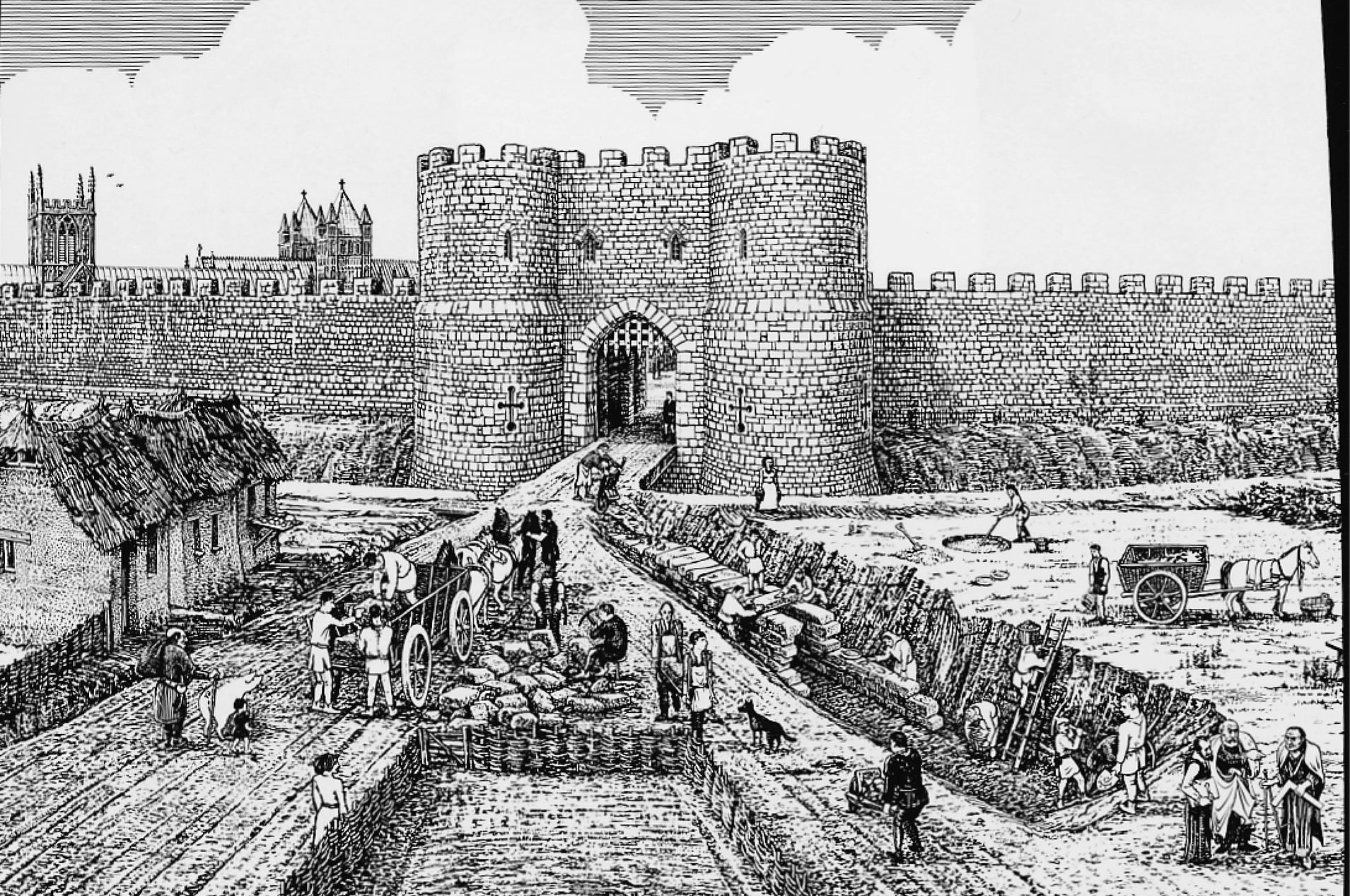 The ancient parish of St Sidwell lies immediately outside the former East Gate of the City astride one of the principal routes into the Roman fortress, the later Roman town and medieval city. Unlike other suspected Roman roads trial trenches excavated by Exeter Archaeology in 1991 in the pavement outside Nos. 149–153 Sidwell Street exposed a gravel surface believed to represent the main Roman road leading northeast from the fortress and later town. Although no direct evidence for a Roman roadside settlement has been identified to date an excavation undertaken in 2011 by Exeter Archaeology at Verney Street exposed activity dating to the Roman period. Further work by Oakford Archaeology on No. 9 Verney Street provided further exposure of Roman activity. Located some way from the main road they are nonetheless indicative of Roman activity in this area in the late 1st- to early 2nd-century AD. Moreover, Roman cemeteries were commonly sited alongside roads outside the settlement area and the potential site of a Roman cemetery lies to the north of Sidwell Street.

Little is known of the development of Sidwell Street in the immediate post-Roman and early Saxon period. The later parish was formerly part of the Saxon Hundred of Wonford and a religious building probably existed on the site of the present church by the 11th century. Street probably began to be built up by the beginning of the following century and the later chapel is mentioned for the first time in 1153 when it was described as a church in the patronage of the cathedral. The Dean and Chapter had acquired the manor at an unknown date, holding extensive tracts of land in the parish that were known by the 14th century as ‘St Sidwell’s Fee’. The chapel contained the tomb of St Sidwell, a local martyr, prospering with the growth of the suburb. Like many churches the chapel was successively enlarged in the early 14th century with the addition of one or more aisles or chapels with further additions in the late 15th and early 16th century. The church was rebuilt in 1812, retaining the piers of the arcade of the medieval building. 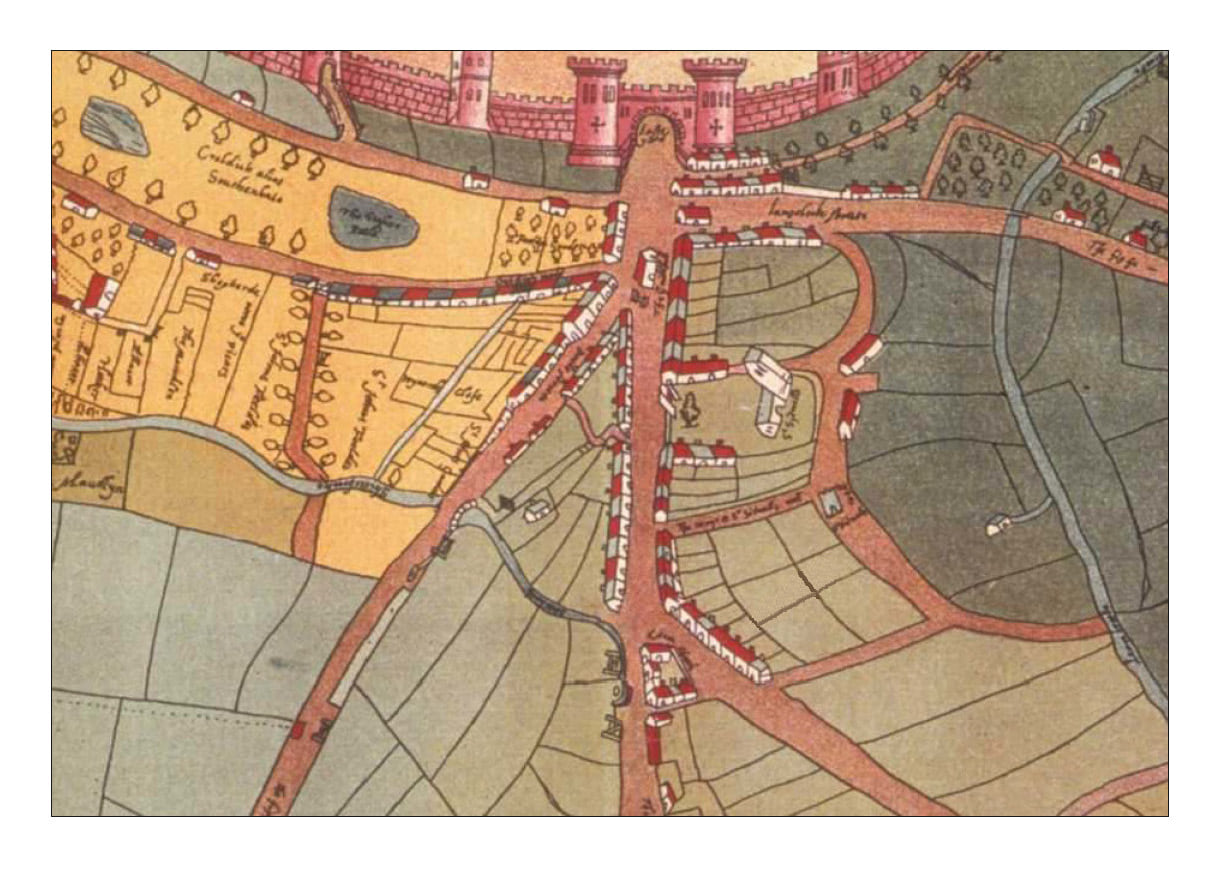 The excavations by Exeter and Oakford Archaeology at Verney Street showed renewed occupation from the 12th or 13th century, continuing into the early modern period. No evidence was found for medieval or later buildings within the site, the medieval and post-medieval pits and ditches lying within the rear plots of properties fronting Sidwell Street. The range of these features is broadly typical of rear garden plots of the period and is consistent with the 18th century mapping which depicts the site as largely undeveloped until the latter 19th century, with garden plots present into the mid-20th century. 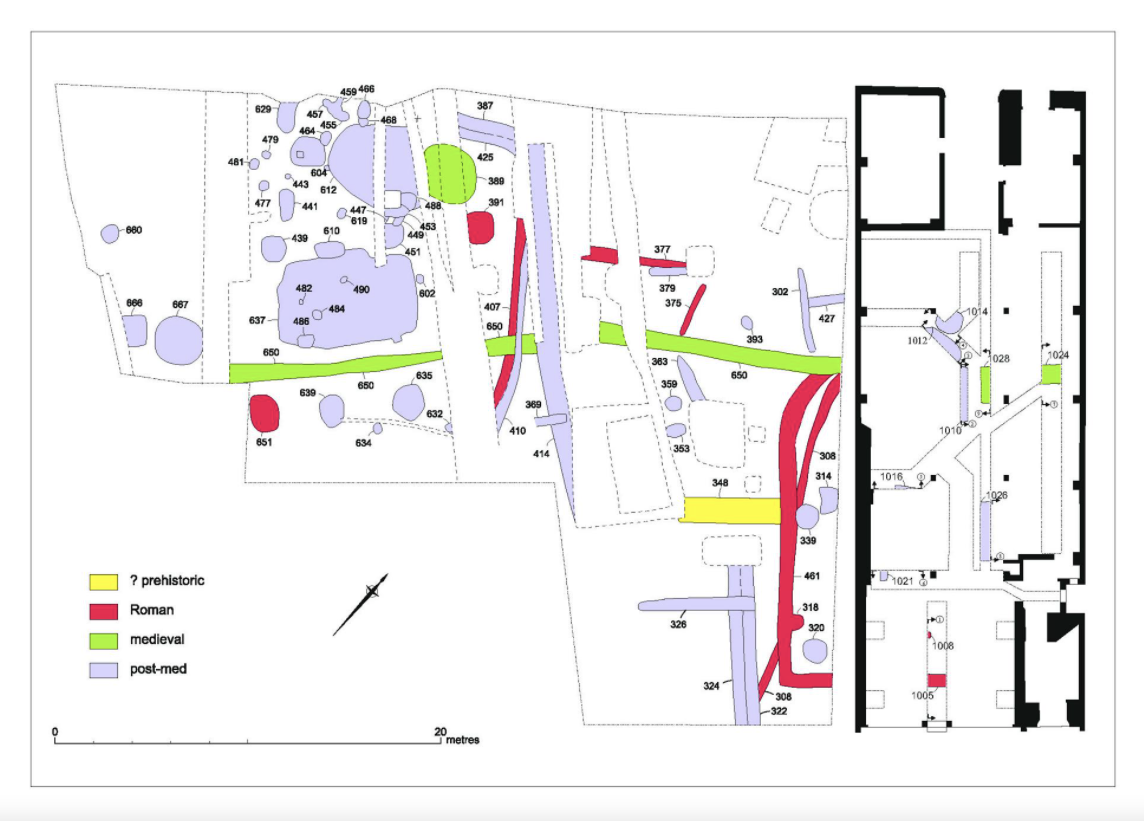 The parish of St Sidwell’s has been providing Exeter with its water supply since the Roman period. Remains of a timber structure were discovered in the 1970s at Paul Street, bringing water from the higher ground to the east. In the Middle Ages water was supplied through lead pipes from the many springs at the head of the Longbrook valley. The stone built lavatorium from St Nicholas Priory, which must have been connected to a piped supply, is dated to 1170-80, while the grant in 1226 by Serlo, the first dean of the Exeter Cathedral, of one third of St Sidwell’s ‘well’ or spring to the prior of St Nicholas clearly implies the presence of a conduit. A document of 1346 clearly refers to water being brought into the cathedral close from St Sidwell’s well via pipes before being diverted three ways, one to the dean and chapter, one to the priory and one to the citizens of the city. Evidence for this early pipe trench was uncovered by Exeter Archaeology in 1982 during the construction of the King William car park and during the 2005-6 Princesshay excavations. A separate conduit was built in the late 1240s from ‘Chalvescrofte and Pudewill’, running along the line of Old Tiverton Road and Sidwell Street to the Blackfriars monastery (Debenhams).

A new well was built late in the late 13th century at the top of present day Well Street, known as ‘the Headwell of St Sidwell’s’. This acted initially as a secondary conduit-head supplying the original aqueduct. However, the supply continued to be inadequate for the growing monastic communities and the city and in 1347-49 the Dean and Chapter agreed to reroute and improved the aqueduct. Having removed the original lead pipes a new stone conduit-house and aqueduct were constructed, the latter descending from Headwell into the higher Longbrook valley and Longbrook Street before entering the city near the East Gate. Beyond, the chapter built the first underground passage to house and be able to maintain the water pipe.

In the 1420s the city built its own supply. The new conduit entered through the East Gate running down the High Street before ending in a stone cistern outside St Stephen’s. The conduit was extended in 1429-30 to Carfax, while further works were carried out in the 1440s and the late 15th century to improve the city’s water supply. The latter led to the construction of the first city passages. 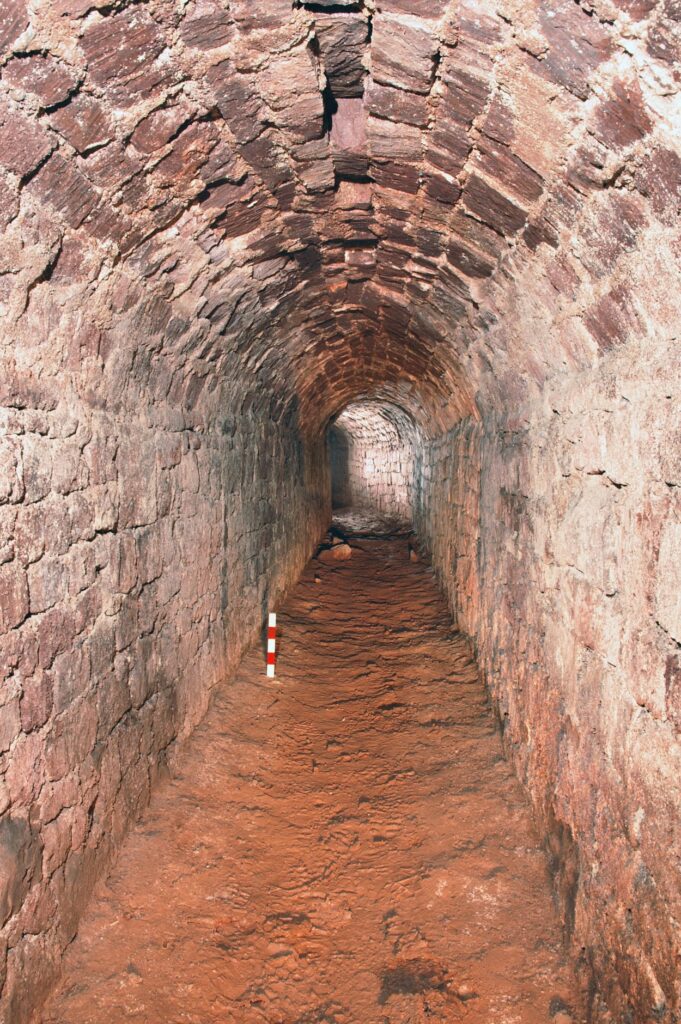 The Cathedral passage underneath Princesshay

Following the Prayer Book rebellion the extramural area continued to expand throughout the later Middle Ages and in 1549 the parish was integrated into the City of Exeter. By the late 16th century houses extended as far east as St Anne’s Chapel and the almshouses.

The suburbs were cleared prior to the two sieges during the Civil War, to provide a field of fire for the defenders, and it is likely that this extended as far as the almshouse, the latter serving as an outlying fort or redoubt. In addition to these measures, large earthworks were constructed outside the East-gate to strengthen the largely medieval fortifications of the city. After the civil war rebuilding started and by the beginning of the 18th century the Sidwell Street frontages had been built up again, with ancillary buildings and garden plots to the rear. However, progress was slow, and the 1744 map produced by John Rocque showed that development did not significantly extend beyond the junction with Old Tiverton Road and the Bath Road (now Blackboy Road). The high number of bequests and charitable works including almshouses, schools for the poor and later workhouses suggest that this was not a particularly wealthy parish during the 17th and 18th centuries. 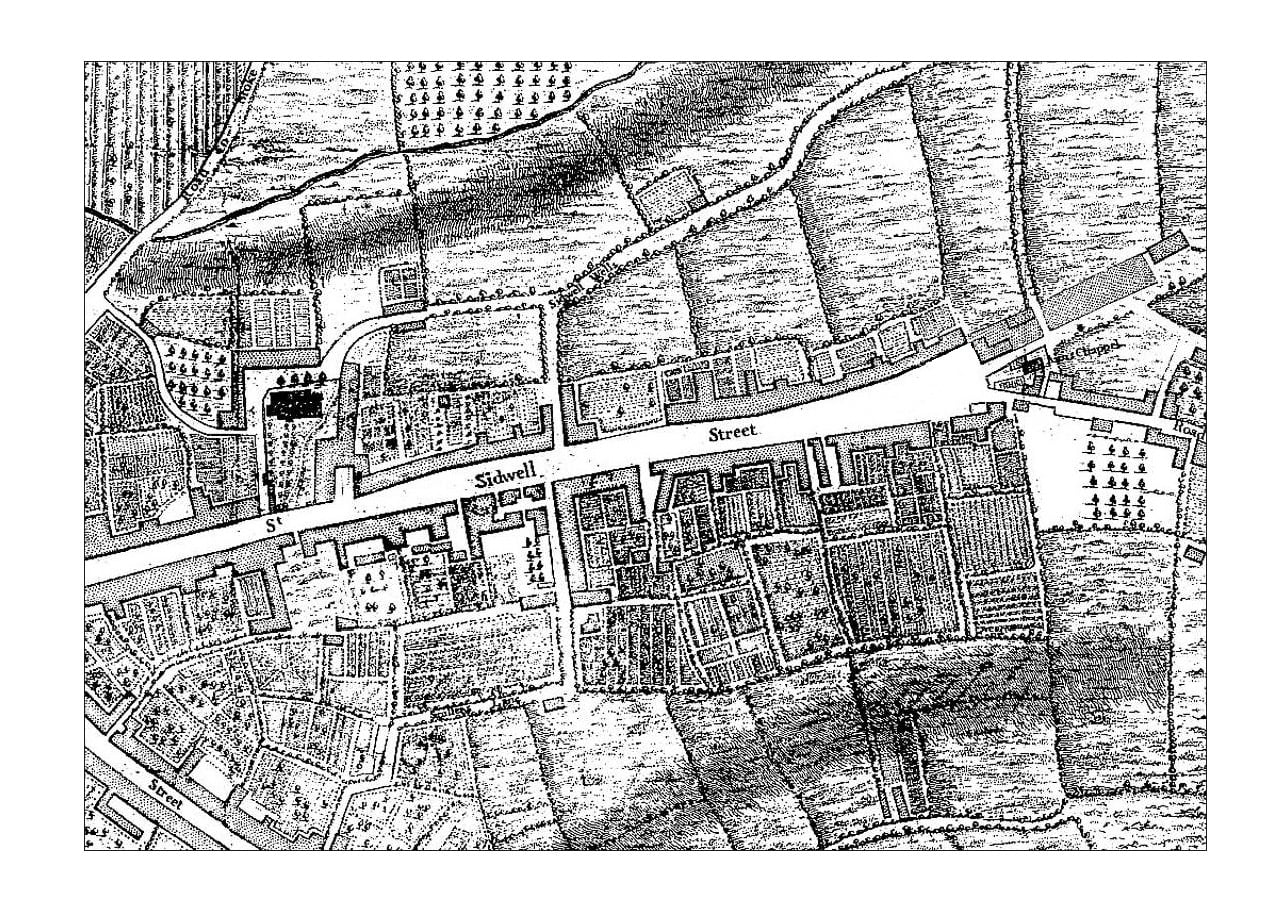 In 1699 the Exeter Corporation of the Poor acquired five fields of 18 acres in St Sidwell Parish to erect a hospital and workhouse. The workhouse (poorhouse) was described as ‘near finished’ in September 1701, though it wasn’t in fact completed until 1707. It wasn’t until the early 20th century that it was recommended that children be moved out of the workhouse, resulting in the building of a Children’s Home in the south-east corner of the site. The functions of the Corporation of the Poor were transferred to Exeter City Council in 1929 and the name was changed from ‘Poor Law Institution’ to ‘City Hospital’ between 1930 and 1931. Following the National Health Act in 1948 the whole site was transferred to the Exeter and Mid-Devon Group of Hospitals and in 1959 a new Maternity Unit was built on the western half of the area. 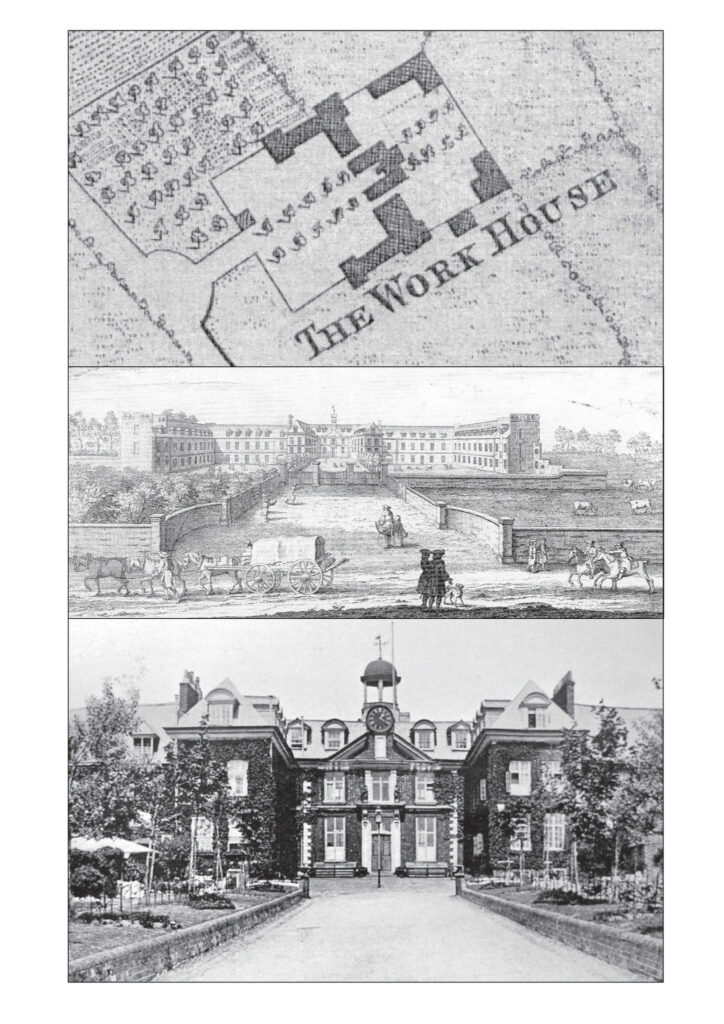 By the beginning of the 19th century Sidwell Street, Paris Street and parts of Longbrook Street were densely lined with buildings, housing a largely working-class population, including ‘weavers and other poor manufacturers.’ The parish underwent further expansion with the creation, in the last years of the century, of large areas of predominately working-class housing in Newtown, Lions Holt and finally in Mount Pleasant. Unfortunately the bombing of 1942 devastated the Sidwell Street area, destroying large swathes of the historic suburb including its medieval parish church. Luckily a few buildings, including the Odeon Cinema with its unusual art deco façade and the Sidwell Street Methodist Church survived the Blitz intact. The former Honiton Inn was until recently the only surviving building from the old Paris Street.